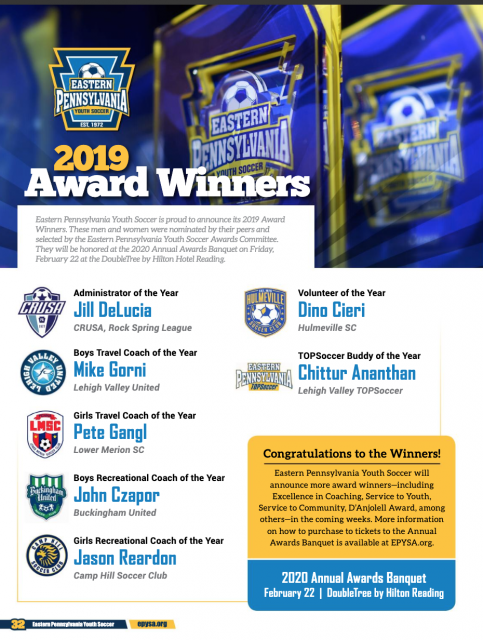 Please join us in congratulating Coach John Czapor as the EPYS Recreation Coach of the Year.  This award is bestowed upon an IM/REC coach that was nominated and chosen for their coaching activities, sportsmanship, player development, personal coaching development and citizenship.
Coach John is that “Coach” you hope your child encounters within their life.  We are grateful to have such a treasure here at CBAA / Buckingham United Soccer.  John’s compassion for life and love of the game of soccer shines through everyday, whether on the field or the sidelines.  John has the unique ability and rare talent to relate as well as develop all age ranges of players. He has always created a safe, fun and positive environment for all.  Throughout his coaching career, Coach John has helped players and teams reach their soccer goals through his teachings, knowing that developing good people is the cornerstone of promoting sportsmanship and teamwork.  John is a versatile coach that truly enjoys coaching and has such pride in all of his players.  His ability to touch the heart his players and instill such confidence and virtues does not go unnoticed. His words and actions have a lifelong impact on his players. John is a true Superhero!
John is recognized at CBAA Soccer for being instrumental in bringing a surge of energy, fun and continued interest to the younger players. John was instrumental in creating our very popular Winter and Summer "U05/U06" Futures Program. He continues to run our CBAA Intramural U05 and U06 Division at the our soccer partner's fields at Camp Curiosity.
Coach Czapor will be recognized at the Eastern Pennsylvania Youth Soccer Awards Banquet on February 22nd in Reading, PA. State winners will be submitted for regional and national consideration. The national Recreation Coach of the Year is announced at the US Youth Soccer Awards Gala, as a part of the US Youth Soccer Workshop at the United Soccer Coaches Convention each January.
EPYS Touchline Publication Winter 2019-20
CBAA Soccer Press Release
#EPYS #DontRetireKid #CBAAProud #LetsJustPlay #CBAASOCCER #BUSCProud #CapturingHearts #KidsFirst #YouthSoccer #WeDoMore #BucksCounty
External links are provided for reference purposes.CBAA Sports is not responsible for the content of external Internet sites.
CopyrightCBAA Sports All rights Reserved. Privacy Notice
Sports League Management Software bySportsSignUp Play